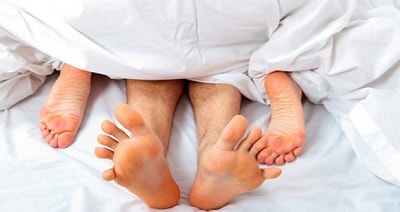 How Common Is It To Die During Sex?

According to the results of a new study, having sex is rarely the cause of sudden cardiac arrest (SCA).

In fact, when researchers examined more than 4,500 cases of cardiac arrest occurring in Portland, Oregon over a 10 year span, they found that only 34 of the cases were linked to having sex in the hour before.

The research was presented at this year’s American Heart Association’s (AHA) 2017 Scientific Sessions. The work was also published as a research letter in the Journal of the American College of Cardiology.

What’s important for the public and well as medical providers to realize is that current advice recommending that it is safe to engage in sexual activity is now supported by real patient data, courtesy of this well done study.

But what’s also disturbing is the fact that only 1/3 of the victim’s partners in this study who witnessed the cardiac arrest performed bystander CPR , part of the reason that only 20% of the affected survived to hospital discharge. This further serves as a reminder of the importance of initiating hands-only CPR, the most important intervention immediately after a witnessed cardiac arrest.

“For every minute CPR is not administered, the chance of survival decreases by 10%,” explained Holly S. Andersen, M.D., Attending Cardiologist and Director of Education and Outreach, The Ronald O. Perelman Heart Institute, The New York Presbyterian Hospital. “Without CPR, brain cells begin to die after 5 mins, and the chance of survival after 10 mins is virtually zero.”

It is well known among medical providers that the risk of having a heart attack or a cardiac arrest among patients with heart disease is quite low for those who engage in sexual activity, as well as those who have recently recovered from a recent heart attack, had cardiac stents placed or even bypass surgery.

To place this in perspective, a 2013 study in the New England Journal of Medicine found that sexual activity lasting 6 minutes burns about 21 calories, the equivalent of taking a moderate walk .

It’s important that medical providers counsel patients in follow-up visits after such procedures to reinforce that sexual activity is safe and the risk for heart attack and death remains low.

But what’s equally important is also getting the message out regarding how bystander CPR–or “partner CPR” in this case–can be lifesaving while waiting for an ambulance to arrive.

This study has its greatest value by providing a real-world assessment of how commonly sexual activity is a factor in SCA in the general population. The Oregon Sudden Unexpected Death Study, conducted from 2002-2012, recorded those persons who suffered a SCA.

The presence of coronary artery disease, heart failure, and those taking cardiac medications were similar among both groups. The New York Post featured the tragic tales of people dying during sex.