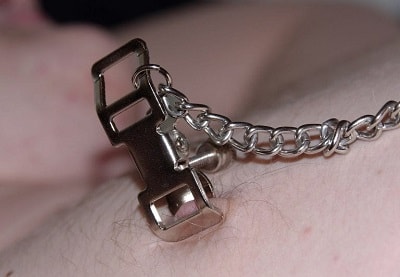 Nipple Clamps: The Perfect Accessory For Your Breasts

When it comes to the many, many different sex toys you can experiment with, nipple clamps are one of the simpler choices. It’s just a clamp you put on your nipple, right?

Strangely though, nipple clamps aren’t nearly as commonly used as they probably should be!

In fact, the only time you really hear about nipple clamps is in relationships where people enjoy things a little rougher.

Even if you’re not quite as into the kinkier side of sex, nipple clamps can still play a role in your sexual adventures. So let’s head back to basics, and look at exactly what nipple clamps are, and why people enjoy using them!

WHAT ARE NIPPLE CLAMPS?

Nipple clamps are one of the simplest sex toys out there. They are literally just a clamp which you place on your nipples!

There are a large variety of styles available. Some are larger and grip more firmly onto the nipple. Others are much smaller, simply resembling a standard clothes peg.

Using nipple clamp simply takes this simple, pleasurable act, and turns it up even more. The clamps provide constant stimulation and will intensify any touch while wearing them.

Of course, nipple clamps aren’t for everyone! That’s completely fine. But we still think they’re one of the most underrated and underappreciated sex toys out there! If you have been thinking about getting your very own nipple clamps, you should go for it and enjoy free shipping on lovegasm.

WHY DO PEOPLE USE NIPPLE CLAMPS?

As we mentioned before, the primary reason for someone to use nipple clamps is for stimulation of the nipples. This part of your body is filled with many nerve endings, and studies have shown links between nipple play and many other parts of your sexual functions.

To start with, when you become aroused, your nipples (and breasts, if you’re a woman) can swell up to 25% larger. When this happens, they become much more sensitive and responsive to stimulation.

Stimulating the nipples also activates many of the other erogenous zones around the body, getting you much more in the mood for almost any kind of sexual activity!

When you add a nipple clamp to the situation, things can get even more intense. The clamp applies pressure to the nipple, as well as restricting the blood flow slightly. Some describe it as an intense pinching sensation.

In fact, stimulating the nipples can produce so much pleasure, that some people are able to experience “nipplegasms” These are orgasms provided entirely by nipple stimulation!

Many people who are aware of nipple clamps might associate them much more with these relationships, which can explore themes of dominance and submission, as well as pain and pleasure. It wouldn’t be wrong to say that the majority of nipple clamp use comes from these kinds of couples.

Two main motivations exist for a “kinkier” couple to use nipple clamps. Those who enjoy exploring aspects of control and domination might use them alongside other sex toys. The dominant partner will often decide exactly how the submissive partner is going to have, and enjoy, sex on a day. This can include things that they both like and dislike.

Just because you can’t show them on Instagram doesn’t mean you should be ignoring your nipples in other aspects of life.

Licking nipples, sucking nipples, squeezing nipples, taking a gander at nipples—everybody needs a cut of the touch activity. Furthermore, why not? Nipples are one of just a couple of prime, supernatural erogenous zones stuffed with heavenly nerve endings that, when animated, can send you into a warmed craze.

“Nipples on all bodies can be extremely touchy, and simply like all bodies are unique, so are responses to nipple incitement. A few people can climax from it, and a few people don’t feel a lot or even like it.

It’s likewise a totally different universe of sexual experience that is shockingly simple to get into, when you know the nuts and bolts. For example, there are a wide range of styles—some are movable, which means you move a little clamp up the cinch to upgrade snugness, while some utilization a screw to change sensation. Indeed, even others are clear clamps, like a clothespin.

And keeping in mind that putting them on is hot, things just get all the more intriguing from that point. It’s the point at which you take them off that the sensation tops. By confining blood stream and afterward discharging it, you get a sharp surge of torment and endorphins.”

The clamps were mounted to the tabletop, and they held the texture set up so the sewers could concentrate on the sensitive work of sewing kimonos or blankets without their work sliding everywhere. Japanese sewing cinches have been utilized for sexual play for quite a while and were the root structure for Japanese Butterfly nipple clamps.